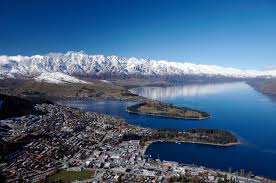 The first of the winter snows have blanketed New Zealand’s Southern Alps as skiers get a glimpse of the winter Coronet Peak, above Queenstown, received around 20cm at the summit and up to 15cm at the base of the ski area. The snowstorm couldn’t have been more timely as the ski area is scheduled to open for the season on Saturday, 11 June.

The Wanaka ski areas of Cardrona and Treble Cone have both received big snowfalls this week. Cardrona has reported a covering of 35-40cm across the entire mountain with drifts of over 2m deep in places. Both mountains are set to open in June with Cardrona already announcing that all trails will be open for the first day of the 2016 season.Temperatures dropped to minus 8 degrees during the night but were accompanied by strong winds, resulting in wind drifts on the mountain as high as 1.5m.

The Remarkables is scheduled to open for the 2016 season on Saturday, 18 June. The trails are starting to take shape and the staff say it’s exciting to see the amount of snow already on the mountain.

Coronet Peak and The Remarkables are both expected to benefit from sub-zero temperatures and more snow in this week’s forecast.season to come in the southern hemisphere’s premier ski destinations.The snowfalls have coincided with the first winter evening flights touching down at Queenstown Airport this week. The approach to Queenstown Airport is already renowned as one of the most picturesque in the world after being voted ‘World’s Most Scenic Airport Landing’ in 2015.

Winter brings the party
Celebrating the start of winter is a local tradition and Queenstown will officially welcome the season on 24 June when the annual American Express Queenstown Winter Festival kicks off. The award-winning festival is the southern hemisphere’s biggest and brightest winter celebration and boasts a calendar filled with fireworks, live music, street parades, comedy, quirky races and mountain mayhem. There are nine new events for 2016, and 40 free events in the programme.