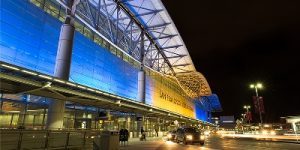 The sale of plastic bottled water in the coming months will no longer be available at the San Francisco International Airport (SFO).

The new environmentally friendly initiative was released by the airport on Friday which is a part of the Zero Waste Plan.

From Tuesday August 20, restaurants, shops and airline lounges will no longer be allowed to serve or sell plastic bottled water.

The airport stated that the SFO’s goal is to reduce the single-use disposable plastics by transitioning to reusable, compostable and recyclable alternatives at SFO shops, eateries and airline lounges.

Water will be available to purchase in bottles made from single and multi use aluminum and glass which will be an alternative to plastic.

There will be 100 hydration station in the airport and drinking fountains in all terminals. This will help in the expansion of access and encourage passengers to refill their reusable/ refillable bottles.

Doug Yakel, spokesperson for SFO, the airport is spearheading greater commitment to sustainability within the industry.

He said that they were the  first airport aware of implementing the change. Being on the leading edge for the industry and wanted to push the boundaries of sustainability initiatives.

Earlier in 2014, the San Francisco Board of Supervisors backed the proposal to ban the sale of plastic bottled water on city property.

All food and beverages prepared at the airport will be served in containers which are reusable or certified as compostable by the Biodegradable Products Institute (BPI) apart from ceasing the practice of serving or selling plastic bottled water at the airport.

The SFO stated in a statement that the initiative support the City and County of San Francisco’s Plastic, Litter and Toxics Reduction Law and will address plastic pollution and the recent collapse of the plastic recycling market.

Apart from reducing the impacts on the natural environment, the transition will make food service ware safer for use and will further simplify and the improve the passenger dining experience.