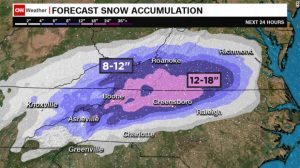 A massive storm on Sunday accompanied by snow, sleet, and freezing rain across several areas of Southeast U.S. has lead to precarious icy roads, power outages and snowfalls leaving thousands incapable of travelling or moving. Texas received a foot of snow.

Several accidents and flight delays were reported. About 1,300 flights in the Carolinas were reported. Over 500,000 customers in North and South Carolina face power losses.

Travel disruptions were the order of the day. Over 1,100 flights to or from Charlotte Douglas International Airport were cancelled on Sunday as per FlightAware, a flight-tracking website. About 200 cancellations of flight were reported at Raleigh-Durham International Airport. Amtrak also canceled or altered service on a number of trains through Tuesday.

Over 500 car crashes have been responded to between midnight and 11 a.m. Sunday as per North Carolina Gov. Roy Cooper.

The ice has made roads dangerous and travel elusive.