To enhance tourism, Mexico to connect with Maya area by train! 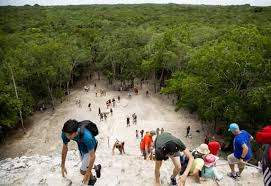 A railroad that covers 1,500 kilometers (930 miles) across the significant archaeological centers of Mayan culture of Mexico and it will cost approximately $6.259 billion (120 billion pesos). This project of the incoming government is expected to crown years of attempts to get the most out of the wonderful tourist attractions.

This project of Mexico’s President-elect Andres Manuel Lopez Obrador suggests that in four years, a “modern” train will link the main points of the Mayan region, which includes the Mexican states of Tabasco, Chiapas, Campeche, Yucatan and Quintana Roo.

“Nowhere else in the world is there a region with so many and such magnificent cultural treasures as this region, which witnessed the flowering of the great Mayan culture,” Lopez Obrador said Monday as he summarized the project and noted the significance of the Maya Train, already considered a priority program of his government.

To begin with, there will be the Mayan city of Palenque in Chiapas State and the Caribbean seaside resort of Cancun in Quintana Roo, with two routes that comprise 1,500 kilometers around the east and west coasts of the Yucatan Peninsula.

In addition to the Mayan ruins of Chichen Itza (Yucatan), Calakmul (Campeche) and Tulum (Quintana Roo), the train will stop at Campeche, Merida, Izamal and Valladolid, attractions which for decades has served as a point of entry to the Mayan world.

“This project will attract a lot of tourism, and of course it will create jobs in the southeast, which is the most neglected part of the country,” said Lopez Obrador, who will be sworn-in as president on Dec. 1 for a six-year term.