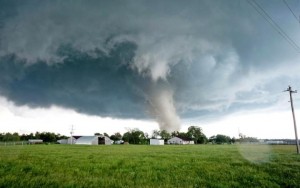 The threat of severe thunderstorms, including tornadoes, expanded into the Ohio Valley into Tuesday night. Reports warned residents and tourists that storms would ignite over parts of central Texas and in portions of Kentucky, Tennessee, Illinois, Indiana, Ohio and West Virginia into Tuesday night.

At least two people are confirmed dead after tornadoes destroyed homes, overturned vehicles and stripped the bark from trees as they churned across Oklahoma, USA, part of a strong series of storms that hit the Plains.

Kentucky State Police said that at least 10 people were hurt during severe storms that spawned a tornado. The statement says the tornado travelled into the city of Mayfield, causing “significant” damage to homes and businesses. Initial reports are that 10 people were taken to a hospital with injuries that are not life-threatening.

The potential for severe thunderstorms, including isolated tornadoes will extend from west-central Texas to southern Iowa and western Illinois at midweek.

The storms destroyed a radio station building in Coal County and an undetermined number of homes in Murray, Garvin and Johnston counties have been damaged as reported by The Oklahoma office of emergency management.

The National Weather Service said a tornado touched down in central Iowa, with no immediate reports of damage, and another hit near Nehawka, Nebraska, about 30 miles south of Omaha. Massive hail fell in parts of Lincoln, damaging cars and other property.