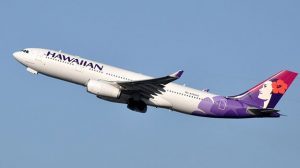 Hawaiian Airlines is recognized by the United States Department of Transportation as the country’s most punctual airlines for the year 2019. According to reports, the airline held the leading position for the maximum on-time arrivals last year, making it their 16th consecutive year of bagging the title of the most punctual airline.

As reported by the Department of Transportation in their annual Air Travel Consumer Report, Hawaiian Airlines retained their punctual arrival timings 11 out of 12 months in 2019. Nearly 87.7% of the flights from Hawaiian Airlines hold the record of arriving on-time from the 1st of April 2019 to 31st December 2019. This rate goes above the U.S average industry rate by 6.1% points.

The U.S. Department of Transportation in their report listed the top 10 most punctual airlines in the United States. Hawaiian Airlines has successfully defeated the other 9 airlines to maintain its punctuality in every single month of the past year barring October.

Peter Ingram, President and CEO, Hawaiian Airlines said in a press brief that more than 7,400 of the airline’s employees are aware of the necessity of punctuality in the life of their guests irrespective of the reason behind their travel. He also expressed his pride and ecstasy over the achievement of his employees and the airline organization. He further shared that Hawaiian Airlines recently celebrated their 90th anniversary and the consecutive 16th years of winning the punctual title add on to another accomplishment that provides them with a reason to celebrate yet again.

On the work front, the airline is waiting to launch its third non-stop daily flight service between Tokyo’s Haneda Airport and the Hawaiian Islands.