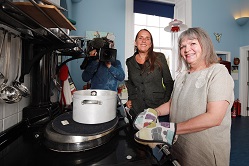 Images of Northern Ireland will be beamed in to the homes of some 700,000 people in Denmark this evening (22 August), when an episode of a popular TV show airs on DR1, Denmark’s largest TV station.

Viewers will see Anne, who’s a chef, meet with Danish-born Lady Dunleath, from Ballywalter Park in County Down, to talk about what makes Northern Ireland food so special. The scenes filmed in the kitchen at Ballywalter will include Lady Dunleath exploring some of the traditions and tastes unique to Northern Ireland. The programme will also feature some of Belfast’s famous sights, including the Botanic Gardens. The episode is expected to be watched by more than 700,000 Danes.

Julie McLaughlin, Tourism Ireland’s Manager for the Nordic Region, said: “Publicity is an important element of our promotional programme in the Nordic Region, so we were delighted when Anders and Anne decided to film an episode of their show in Northern Ireland. TV programmes like this are a great way to shine a spotlight on Northern Ireland, including our food and culture, as well as some of the many things to see and do on holiday here.”