Aeromexico flight crashes but 101 on board survives, many injured 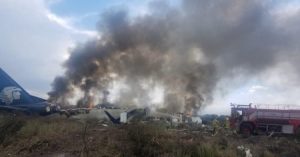 An aircraft that was headed for Mexico City crashed into a field close to an airport in the Mexican state of Durango that left many people injured but miraculously everyone on board the flight was able to survive the fatal crash.

Though no passenger has died in the crash, 49 people were hospitalized out of 97 passengers and four crew members who were on board the Aeromexico airplane on flight 2431, as reported by a leading news media agency.

A fire broke out subsequently after all the passengers were capable of leaving the plane as per the wire.

In a statement released by Aeromexico, the airline said that their ‘priority is guaranteeing the safety of clients and crew onboard’. They do not have a report of any fatalities at the moment.

The authorities went on to add that they have started working with corresponding authorities for the medical attention of the passengers and crew as per the official statement.

The statement read that they have been gathering additional information and will provide more details when they become available and confirmed and that they profoundly regret this accident.

The governor for Durango, José Rosas Aispuro Torres tweeted that some of the passengers and crew members had been taken to several hospitals within the area.

He also confirmed that there had been no deaths in the crash in a tweet written in Spanish.