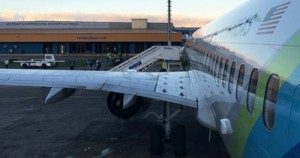 The new route, which is another in Alaska Airlines’ latest series of growth, is now one of 15 daily flights that Alaska operates to John F. Kennedy from the West Coast. Others include flights from Las Vegas, Los Angeles, Portland, San Francisco, and Seattle.

The travellers on the route will be able to take advantage of the new Alaska Lounge at John F. Kennedy’s Terminal 7. The lounge, which opened at the end of April, offers espresso, fresh food, microbrews, wines, and signature cocktails. The flyers of Alaska Airlines who have purchased a day pass or have lounge membership or First Class tickets can get access.