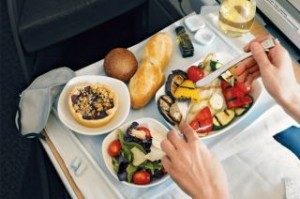 American Airlines this month has introduced a new service for customers who sometimes get hungry in flight, but find there is nothing left on board to eat when the service cart with all the snack boxes rolls up to their seat.

A new pre-order option offers AA-ticketed customers the chance to pre-reserve for specific flights economy-cabin snack boxes, including such items as chicken wraps and cheese and fruit boxes.

Customers can do the pre-ordering on the American Airlines website, but no payment is made at the time a snack box is reserved for a particular flight.

This airliner has built flexibility into the new system.

Passengers can opt out of actually purchasing the snack box if they get on their flight and find they aren’t as hungry as they thought they would be. If passengers wind up bringing something on board with them to chow down on inflight, they also aren’t obligated to buy the snack box.

The new pre-order economy food service comes as American is making several adjustments in its economy cabin operations. Chief among them is the move to give passengers seated in the carrier’s Main Cabin Extra (MCE) area added frills beyond more legroom that has been the principal lure until now.

In June, American began offering complimentary beer, wine and spirits to passengers seated in MCE section of the economy cabin.