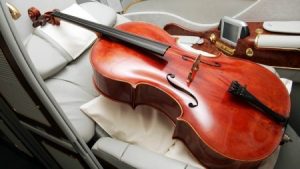 A musician who had reserved a separate seat for her $30,000 cello said that she was booted off an American Airlines flight as he made attempts to return home to Chicago.

The incident has made national headlines after a Facebook post uploaded by the musician’s husband has gone viral.

This post had been shared more than 2,300 times as of Monday morning has detailed the travails of DePaul University music student Jingjing Hu as she tried to fly back from a music conference in Miami with her instrument.

Tang said via his post that his wife was removed from the flight even though the couple thought Hu had done everything required to fly with her cello in the seat beside her. Hu, Tang wrote, had already successfully flown from Chicago to Miami on her outbound flight with her cello occupying the dedicated seat they had paid for.

The lady has stated that when she had flown from Chicago to Miami, she did not have any trouble, noting that the crew even assisted her with a strap to help hold her cello in place. Hu told the station her instrument was worth about $30,000.

On the return, however, Hu ran into problems.

Tang, via Facebook, wrote that Hu arrived to Miami International “3 hours ahead, checked in her luggage, went through security check, and boarded the plane normally. Just before the flight attendants were about to close the gate, she was told to get off the plane because ‘the aircraft is too small for the cello’.”

Tang added Hu was told she could fly on a different American flight about an hour later, but then a separate kerfuffle arose when – according to Tang – Hu’s cello case apparently bumped one of the flight’s pilots as she was escorted off the flight.

In the end, Hu made it back to Chicago – albeit it a day later and after yet another mix-up where she ended up on a shuttle to the wrong Holiday Inn for her unexpected night in Miami, according to a leading US news platform.

American confirmed that there was an issue with the cello on the flight from Miami, which the carrier chalked up to a “miscommunication.”