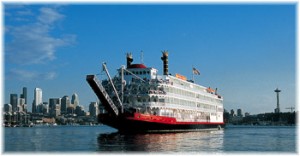 American Queen Steamboat Company announced lay-up details für the American Queen and American Empress as part of the off-season before moving full steam ahead into the 2016 sailing schedule.

“In 2015, we enjoyed a banner year for both vessels, bringing the pleasure of river cruising to a record number of guests and adding itineraries to the season in order to accommodate the large number of reservations,” shares American Queen Steamboat Company President and COO Ted Sykes.
“With necessary repairs and improvements, we are delighted to have 2016 underway in style.”

The off-season is actually quite bustling and a time of rapid change for the vessels. With a dedicated crew, the management teams have organized a schedule, budget and list of priority items to accomplish during the lay-up such as cosmetic changes including new paint, carpet and upholstery in public areas.

Lay-up repairs and improvements include: