Americans tourists can look but mustn’t touch the Cuba beaches 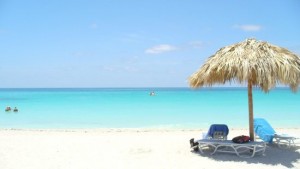 With the President Obama entourage coming to Cuba, Havana hotels are sending their tourists to a place that they love but cannot experience — the beach.

The scheduled historic trip to Cuba by President Obama from March 21-22 with bring a  convoy of hundreds with him. This trip is significant after 15 months of warming relationship to cover up more than half a century of animosity.

March is traditionally a busy month for Cuba with tourists inflow at its maximum but with the Obama visit there will be additional pressure on the hotels that are already booked to capacity in this peak tourism season.

However, major hotels are being cleared to make room for the US diplomatic travellers so that business relationships are not damaged. Guests are being sent to Varadero from the 19th to 23rd of March according to local tour operators.

The resort is just an hour’s drive from Havana and is a much sought after tourism destination with its white sandy beaches and shimmering blue sea.

But the most difficult part for most American tourists is that beaches are off limits for Americans after the US law restricts them for enjoying the beaches of Cuba. They are only authorised to make educational and cultural exchanges with Cuba. U.S tourists are mostly limited to Havana for this reason where they find cultural sites and other activities. The seafront is rocky and hotel rooms are scarce.

But now with U.S. tourists going so close to the beach front it will be hard for them to resist the white sand and the turquoise water, all they can do is to look on to the sea or eat and drink at the bars and buffets. American visits to Cuba soared 77 percent in 2015 to 161,000 visitors. Cuba is expecting a similar increase this year.

The U.S.-Cuban detente announced by Obama and Cuban President Raul Castro in December 2014 prompted Americans to visit Cuba. Obama, a Democrat, has loosened travel restrictions but only Congress, currently controlled by Republicans, can lift the U.S. embargo and its ban on tourism.