Amid trade tensions, Chinese tourists unwilling to visit the US 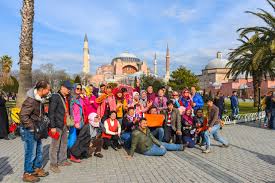 Chinese tourists’ interest in traveling to the US has weakened as peak vacation season approaches amid increasing trade tensions between the two countries. Trade analysts said that domestic tourists might turn to Europe and Russia instead, which could hurt the US hospitality, catering and other tourism-related industries.

In the first half of this year, search popularity for the US cities, including Los Angeles, New York, San Francisco, Las Vegas and Boston, showed a decline in July, which is traditionally a peak season for the US tourism. Chinese tourists started showing increasing interest in cities in Russia and some European countries. For example, Moscow was up 78 percent in popularity, while Nice in France was up by 31 percent.

A report from the US Travel Association said that China was the third-largest overseas inbound travel market to the US in 2016. US travel exports to China reached $33.2 billion in 2016, which is significantly higher than any other country. Average spending per Chinese visitor was $6,900 in 2016, the highest of all international visitors.

Brand USA led a group of eight tourism-related US entities to Harbin, the capital of Northeast China’s Heilongjiang Province this month for attracting more tourists. China is expected to be the US’ second-largest overseas inbound market by 2020. However, experts noted that under the current Sino-US trade relations, the goal might not be achievable.

Tags: Chinese tourists unwilling to visit the US