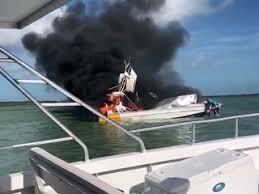 A tour boat exploded in the Bahamas and killed an American woman. The incident also injured nine others, as per the local officials.

This boat had been carrying 12 passengers including 10 American tourists and two Bahamians, off the Exumas islands on Saturday when there was an explosion aboard and the boat suddenly burst into flames as per the US Coast Guard and regional reports.

Video portrays the small, white boat completely ablaze with plumes of black smoke emanating from it.

This video was posted on YouTube. It was taken from a neighbouring vessel and shows swimsuit-clad holidaymakers panicking and crying as they helplessly gazed at the roaring flames.

Two people can be seen wading on the waters towards the inferno apparently, trying to rescue them.

American Stefanie Schaffer sustained life-threatening injuries and was in critical condition after a double amputation, her family said.

The boat bursts into flames shortly after 9 a.m. said Brooke.

The woman who died and five other tourists injured in the explosion were not identified as reported by a leading local news media website.

This is a sad day for Exuma and a sad day for American friends said Chester Cooper, an Exumas and Ragged Island Parliament member in a statement on Facebook.