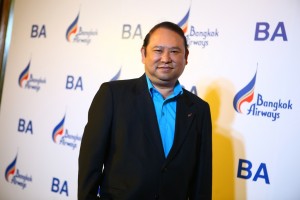 Mr. Puttipong Prasarttong-Osoth, President of Bangkok Airways PCL commented that, “In 2015, total revenue of the company was 24,902.3 million baht, increased by 12.6 percent from the previous year. Net profit was reported at the amount of 1,849.1 million baht, increased by 379.4 percent from 2014 in which the profit attributable to the equity holder of the company was 1,796.9 million baht. Earnings per share equal to 0.86 baht. The improving performance of airline business was mostly contributed to growing number of passengers and better average fares together with dropping fuel costs. The number of passengers of Bangkok Airways in 2015 was increased by 7.5 percent (5.1 million passengers.) The markets that have the highest growth from points of sales were Asia, Europe and North America.”

Recently, Bangkok Airways has been named CAPA Asia Pacific Regional Airline of 2015. The award is given to the regional airline that has been the biggest standout strategically, established itself as a leader and demonstrated innovation in the regional aviation sector. CAPA – Centre for Aviation is the leading provider of independent aviation market intelligence, analysis and data services, covering worldwide developments. The CAPA Awards for Excellence are not driven by customer surveys, popular votes or sponsorship. They are independently researched by CAPA’s leading team of analysts, and then selected by an independent international panel of advisors.