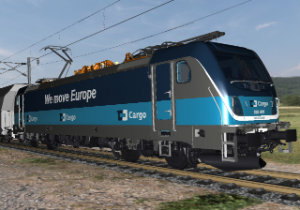 Rail technology leader, Bombardier Transportation and CD Cargo, the freight subsidiary of Czech Railways, have signed a purchase agreement for up to 50 of the newest generation of BOMBARDIER TRAXX Multi-System* (MS) locomotives. This first call-off is for 10 TRAXX MS3 locomotives.

Ivan Bednárik, Chairman of the Board of Directors, CD Cargo, said, “The new TRAXX MS3 locomotive will be the most modern in our fleet. Its powerful traction and cost-effective long-distance performance will support our international business strategy and be fully interoperable in both the domestic market and neighbouring countries.”

“We are proud of the trust and confidence that our new customer CD Cargo has placed in our innovative TRAXX MS3 locomotive”, said Michael Fohrer, President, Region Central & Eastern Europe, Russia, Israel, CIS and China, Bombardier Transportation. “With this success in the Czech Republic, the order marks the entry of our new locomotive platform in the Central, Eastern and South Eastern European market. Once again, the TRAXX locomotive platform’s excellence and its track record of over 2,250 units sold has convinced another important customer.”

The TRAXX MS3 locomotive is the only multi-system locomotive on the market with the Last Mile function that enables it to easily bridge non-electrified track sections found in ports or freight terminals. The vehicle addresses customers’ need for improved profitability, increased flexibility as well as for more reliable performance and availability throughout the locomotive’s entire lifecycle. This new multi-system locomotive will be equipped with the latest version of the European Train Control System, Baseline 3, ensuring seamless operation from day one.

With this new order, 54 modern, interoperable TRAXX multi-system locomotives have been ordered by Czech customers. CD Cargo’s first ten locomotives will be used for freight and passenger transport in the Czech Republic, Slovakia, Germany, Austria, Poland and Hungary while extending the fleet’s operability to Slovenia and Croatia. The locomotives will be assembled at Bombardier’s site in Kassel, Germany, with the carbodies coming from Wroclaw, Poland and the bogies produced in Siegen, Germany.

Bombardier is the second largest rolling stock manufacturing company in Czech Republic. It has more than 1,000 employees in its Ceska Lipa manufacturing site, which is key supplier of welded components for Bombardier’s regional and commuter trains, trams and metros. Bombardier’s products support rail and urban transport in Czech Republic every day. More than 40 TRAXX locomotives are in operation for several operators for whom Bombardier also provides service and maintenance. Moreover, Prague Metro Line A and B are equipped with BOMBARDIER CITYFLO 350 mass transit train control solution.