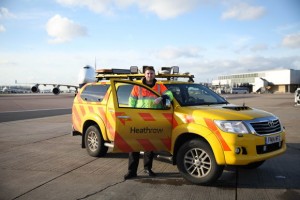 The second episode of ITV’s ‘Heathrow: Britain’s Busiest Airport’ airs on Monday night at 9pm and promises to give viewers more fascinating insights into UK’s only global hub. There are hopes it will top the 3.7 million viewers received for the first episode of the three-part series shown last week.

It will introduce viewers to more Heathrow staff in just some of the diverse roles that make up the 76,000 who work at the airport as part of ‘Team Heathrow’.

The fast-paced documentary goes behind the scenes to look at how the world’s busiest two runway airport is run. Episode 2, which airs at 9pm on Monday 6th June, features Passenger Experience Managers from Terminal 4, the Airside Safety team, Security Officers working in Terminal 4 and operational staff from British Airways.

The first episode in the three-part series, shown on Monday 30th May, attracted 3.7 million viewers, which was 18% of the total audience share. The episode highlighted Security Officer Shahid Saleen as he helped a passenger who was trying to take tools in his hand luggage, as well as Callum Riseley and Demetrios Geniris, Passenger Experience Managers from Terminal 2, who worked together to support a number of passengers who were affected by flight cancellations due to fog.

Some of the staff to look out for in episode 2 are:
Sunita Nanda, a Passenger Experience Manager in the operations team for Terminal 4. She lives in Slough and has worked at Heathrow for nine years.

She said: “I live near the airport and always wanted to work here, so getting the job was a dream come true. As a Passenger Experience Manager you can face several situations at one time, so you I need to think on my feet and decide how to prioritise and what I need to do. Things can take from a couple of minutes to several hours to deal with but the best bit is that I can make a difference to the passenger and help get the best outcome.”

Her favourite moment working at Heathrow was when a young man proposed to his girlfriend as she arrived. He bought lots of balloons and large photos of her which he requested random people to hold as she walked along the arrival concourse with violins playing to where his friends were with the balloons and proposed to her. She said yes.
Chris Simpson is an Airfield Operations Officer. He lives in West Drayton and has worked at Heathrow for 10 years.