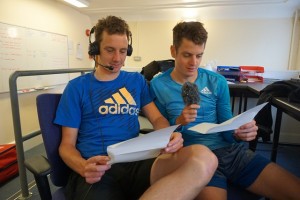 Yorkshire triathlon duo Alistair and Jonathan Brownlee took control of the station microphone as special guest announcers ahead of the Columbia Threadneedle World Triathlon in Leeds on 12 June.

The Bramhope-based brothers took time out of their busy training schedule ahead of the race to record important safety messages for passengers planning to use Leeds station to see them compete in the international race, which is usually held in Hyde Park in London but which has been brought to Leeds for the first time this year.

Alistair and Jonny, who will also compete for Team GB in the Olympics in Rio in August, each recorded a series of messages reminding those attending via Leeds station that train services will be extra busy, to take extra care with heavy luggage and not to “swim, cycle or run” through the Network Rail managed station.

The messages are being played in the weeks building up to the event, which will see thousands of fans flock to Leeds city centre not only to see the Brownlees in action but also to compete in an amateur event which follows the same route as the professionals, including a swim in the lake at Roundhay Park before cycling and running through the city centre.

Olympic gold medallist and two time World Triathlon Champion Alistair said: “Doing the station announcements was really good fun. We can’t wait to see the crowds over the weekend on what will be a special day for the city.”

Jonny, who won bronze at the London 2012 Olympics and won the World Series in the same year, said: “It’s going to be an amazing day for Leeds and for the fans who come out to see us and to race.”

Helen Dawson, station manager for Network Rail at Leeds, said: “I’m so grateful to Alistair and Jonny for agreeing to be our celebrity station announcers, they were both naturals in front of the mic. We’ve been preparing the station for the triathlon for many weeks and will have extra staff on hand as well as longer trains to help get people to where they are going as quicker and safely as possible, but we do ask people for patience and that they leave extra time to travel.”