Can virtual reality dictate the future of tourism sector? 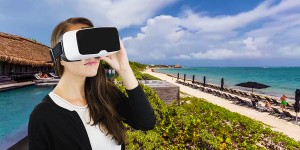 Today, one cannot even imagine life without technology. Virtual reality is that part of technology which creates an illusion of reality in the mind of the user, with the help of visuals and ambience sounds.

There was a time when people did not even think that the existence of internet, existence of search engines like Google; social media sites like Facebook, twitter and Instagram could be promising. But, eventually all of them managed to prove their usefulness. Virtual reality is going to get the same kind of importance in a very near future; only the wisest of all will understand it. Some of the travel companies are being very courageous and far-sighted right now, by starting virtual reality projects to boost tourism.

Yosemite National Park recently teamed up with ‘YouVisit’ and created the virtual version of the park to attract prospective tourists. Tourism Australia is presently working with ‘GET Creative’ in order to create VR clips to give people a small taste of the tourism hot-spot.

HTC Vive, Oculus Rift are the two companies those provide VR headsets. Similarly, Google and Samsung are also putting a lot of effort in order to give more accessible experience to the people.

It can be estimated with the help of research data that the VR system will be replacing the household television sets in near about 10years. So, there is no doubt that VR system is going to affect tourism sector in one way or the other. But it is very hard to say whether the impact will be completely positive or entirely negative. There is a possibility that VR clips will attract travellers to specific travel destinations. But, it is also possible that the busy bees might choose to experience all those travel destinations with the help of a VR headset, lying on their own bed. There is a chance that they might never visit the places in person.