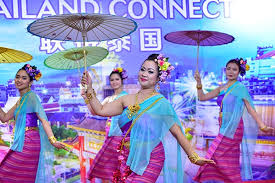 The Thailand Convention and Exhibition Bureau signed a Memorandum of Understanding with the China Chamber of International Commerce on May 28, aimed at attracting more MICE travelers from China — its biggest source market.

Under the terms of the agreement, TCEB and CCOIC have agreed to establish a long-term partnership in several areas and across several MICE platforms. This includes a plan to further improve and regularly exchange information on trade promotion, and a commitment to providing support and encouraging academic research, business trade missions and participation in trade events in both countries.

“Thailand and China have enjoyed more than 40 years of relations and mutual prosperity in which trade between the two nations now exceeds $63 billion annually,” says Nopparat Maythaveekulchai, president of TCEB.

The MOU has been initiated so that enhanced cultural and economic exchanges will improve and enhance the MICE industry.

Tags: The MOU has been initiated so that enhanced cultural and economic exchanges will improve and enhance the MICE industry.