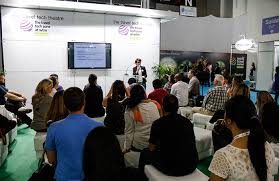 China, the world’s biggest outbound tourism market, was one of the highlights of the first day of the fourth edition of WTM Latin America, which is taking place until Thursday, 31 March in Expo Center Norte in São Paulo, along with the 45th Braztoa Business Event.

The destination was the theme of the UNWTO Symposium: ‘The Potential of the Chinese Tourism Market for Latin American Destinations’, promoted by UNWTO (World Tourism Organization). During the session Márcio Favilla, the entity’s Executive Director, and David Tang, Vice President of Ivy Alliance Tourism Consulting, talked about the potential of the Asian giant as far as the industry is concerned.

As the biggest market in the world for tourism, exceeding even the United States, the country recorded 117 million international departures in 2014, 19.2% increase over previous year. Chinese tourist spending reached USD 215 billion in 2015, a 53% increase over 2014.

Brazil today still plays a small role in this scenario. While China’s neighbours have the biggest slice of the pie, with Hong Kong, Macau and Taiwan snapping up 70% of this total, the United States receives 2% of the Chinese who travel internationally and just 0.7% go to the other countries on the American continent, including Brazil.

“We believe in the growth potential of the Chinese participation in the Brazilian market. It’s our biggest challenge”, said Favilla. He believes that there are five main problems that are a bar to a more expressive entry by the Chinese into Brazil: access difficulties, like visa restrictions; connectivity issues in more remote areas; the marketing strategy, which does not reach the Chinese public with all its peculiarities; the absence of multi-destination trips, including to other capitals in Latin America, like Buenos Aires; and the lack of cooperation between destinations and public and private sectors.
For David Tang, Brazilian inward tourism needs to adapt to fit the particular requirements of the Chinese public. “The demands are more and more diversified, personalized and fragmented”, he pointed out. “They increasingly focus on the quality and experience of the trip, rather than on price”, he added.

During the session the participants got to know details of the China Outbound Tourism Quality Service Certification Program (QSC Program), which measures the quality of service providers around the world and guarantees that the products of those that are approved will be divulged in the Asian country.

China was also mentioned during the presentation of WTM Latin America’s Trends Report, which was prepared jointly with Euromonitor International and revealed on this Tuesday afternoon.

According to the survey, Brazil is likely to register an increase of 33% in the arrival of Chinese tourists over the next five years. The first force that should move the market is the consolidation of China as the biggest outbound tourist market. That’s why sector players – hotels, travel agencies and service providers, among others – must prepare. “What companies need to do is adapt their service to fit the Chinese culture. For example, having electric kettles in hotel rooms”, said the research manager of Euromonitor International, Alexis Frick.

What these tourists are mainly interested in is making purchases, particularly of luxury brands.

The director of the São Paulo Convention & Visitors Bureau, Sara Souza, was positive in her assessment of the focus on the Chinese tourism market. “This is a public that always came here, but over the last three years their presence has intensified. That’s why and because of the demand of our associates, the number of training courses we offer to receive them better has increased.”

“We’ve noticed an increase of 10% to 15% in the demand for our hotels from Chinese tourists. This will improve by even more if we invest and we want to strengthen our partnership with Brazilian agencies that are already serving this market”, said Nivaldo Egeia, Account Executive from the Windsor chain.

“China is a world power and extremely important to the tourism chain. We’re very happy to present the participants of WTM Latin America 2016 with all the potential of these tourists and enable business to be generated with the country”, said Lawrence Reinisch, Director of WTM Latin America.