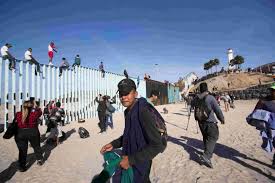 Tour operators and medical and dental offices in the Mexican border city of Tijuana are seeing a slowdown in business since the arrival of caravan of Central American migrants in the region.

Tourists and visitors have been cancelling planned trips to the Mexican state of Baja California since the border crossing shut down briefly a week ago following rushing across by some migrants.

Tourism-friendly business owners said that visitors fear getting trapped in Mexico should the crossing close again.

Mexican authorities started moving Central American migrants out of an overcrowded shelter near the U.S. border on Friday, taking them to a former concert venue further from the crossing.