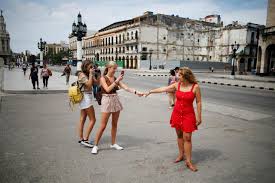 In the colonial Cuban city of Trinidad, handicrafts shop owners said that they have already reduced prices due to the drop in U.S. visitors after Washington’s tightening of sanctions and they are worried that the situation will deteriorate this year.

Trinidad is a five-hour drive east of Havana, and featured as one of the top destinations for the Americans that visited Cuba after the Obama administration eased decades-old restrictions on traveling to the island.

But the number of U.S. visitors dropped by 21.9% last year after the Trump administration tightened those restrictions again, banning the recently re-instated cruises.

The U.S. visitor numbers are expected to go down this year due to new U.S. curbs on U.S. flights to Cuba that came into effect since December.

The total number of visitors to the island dropped by 9.6% last year to 4.275 million.
In addition, the Trump administration barred U.S. airlines from flying to all destinations in Cuba besides Havana in December and said that it would curb public charter flights too.

The tourism ministry’s delegate in Cienfuegos, Jose Gonzalez, said that the U.S. sanctions on oil shipments to Cuba were also witnessing an unforeseen effect. Some boat operators had to shut sporadically due to lack of fuel.