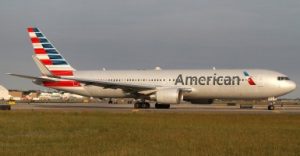 Earlier this week, an aircraft of American Airlines flight 163 that was travelling to Los Angeles was grounded by 1,400 pounds of what the pilot had termed as ‘government documents’.

The excess weight was offloaded before the flight could leave.

An associate professor of professional practice at the University of Southern California, couldn’t help but chuckle when he heard the announcement mentioning that the flight was delayed for that particular reason.

Hernandez, in town for an academic journalism conference, joked that perhaps it had something to do with the Robert Mueller investigation, which has amassed more than a million pages of documents since it began last year, according to some reports.

Thereafter, a spokesman of American Airlines named Matt Miller confirmed that a flight was delayed for about 30 minutes.

He then went on to state that the airline did remove 1,400 pounds of cargo. As to whether all that weight was federal paperwork, he was not certain.

That captain’s comment, he said, may have been in jest.

However, Miller did note that American Airlines has a contract with the U.S. Postal Service to transport mail, so it’s possible that some of that weight was overstuffed flat-rate boxes and birthday cards bound for the West Coast.

Miller said the reason was a weather-related weight restriction — there were storms followed by intense heat Monday — and that meant the crew had to lighten the plane.