Dallas storm leads to cancellation of 200 American flights on Monday 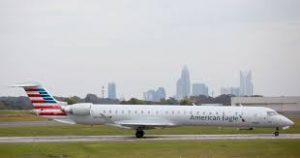 A storm on Sunday in the Dallas area has led to the cancellations of more than 200 flights of American Airlines on Monday, which is one of the busiest travel days of the week.

“Bad weather in the Dallas-Fort Worth area yesterday disrupted our normal operations,” American spokesman Ross Feinstein said in a press statement. “While the weather is out of our control, we’re sorry for the trouble it’s caused, and we’re doing everything we can to get our customers on their way to their destinations as soon as possible.”

As of 8:20 a.m. Monday, Feinstein said American still had a backlog of “about 80” cancelled flights as it tries to catch up. According to real-time tracking website FlightAware, American, which has a major hub at DFW, had the most backups of any airline in the world with 228 cancellations and 162 delays as of 10 a.m. EDT.

On Sunday, American cancelled 323 flights and a total of 515 flights were cancelled at DFW. Mesa Airlines, a regional airline that operates as American Eagle, and United Express, and Endeavor Air, a regional carrier that operates Delta flights, each had more than 200 cancellations Sunday.

By comparison, on Saturday evening, DFW had 35 cancelled flights and 24 on Friday night. American had 53 cancellations on Saturday and 56 on Friday respectively.