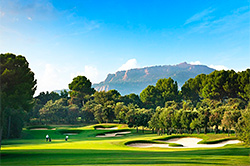 El Prat, which dates back to 1912, is one of Spain’s most highly rated courses having staged the Spanish Open on 10 occasions, as well as playing host to some of the biggest names in golf, including home legends Severiano Ballesteros and José Maria Olazábal, eight-time Major winner Tom Watson and European Ryder Cup captain Thomas Bjørn.

The package on a bed and breakfast basis per person sharing a double room from September 1 to October 31 for the luxurious Gran Hotel La Florida is €358 (£316) per person for two nights with two green fees, €519 (£458) for three nights and three green fees and €692 (£611) for a four-night stay with four green fees. A complimentary shuttle to the city centre is available.

Marcello Della Vecchia, director of sales and marketing at El Prat, said: “Having such a celebrated hotel like La Florida is the perfect partnership for Real Club de Golf El Prat. Hotel La Florida has hosted many celebrities and royalty and is commonly seen as one of the finest hotels in and around Barcelona.

“And is a great place to stay to be able to enjoy the city and all its sights, while also getting to enjoy playing golf at El Prat, which is one of the most highly acclaimed courses in Europe.”

Gran Hotel La Florida is regarded as one of the most celebrated boutique hotels in Barcelona, boasting incredible panoramic views of the city and the Mediterranean Sea 500 metres above sea level from the iconic Tibidabo hill. The five-star elegant building, dating back to 1924, is home to a spa, first-class restaurant, infinity pool, steam baths and fitness centre.

El Prat is one of the oldest courses in Spain and remains one of only a small number of clubs to have been granted royal status by King Alfonso XIII, hosting major Spanish and international amateur tournaments, such as the 2013 European Amateur Championships, and more than 250 national and international championships.

It was recently named one of the 125 Platinum Clubs of the World – Five-star Private Club – in recognition of attaining a standard of excellence by an international panel of experts, historians and connoisseurs in a confidential ballot, as well as being granted the Golden Plaque of the Royal Order of Sporting Merit.

Set across the 518-acre estate of BonVilar, El Prat, which is 35 minutes from the centre of Barcelona, cleverly makes use of its 45 Greg Norman-designed holes over an exciting and varied mix of five highly acclaimed courses – the Open, Blue, Yellow, Pink and Green. It also offers a modern and lively clubhouse and top-quality practice facilities, including a 300m driving range and a host of specialist short-game areas.