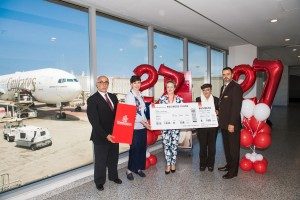 Emirates, the world’s largest international airline, celebrated its 5 million passenger mark at Beirut Rafic Al Hariri International Airport. The airline has been operating in Lebanon for more than 27 years and in celebration of this milestone, a handful of passengers were treated to Business Class upgrades to Dubai.

“Emirates’ 27 years of service and growth in Lebanon is a testament to our commitment to the country. We proudly connect Lebanese nationals to and from Beirut on our 21 weekly flights with their friends and family, and we hope that our operations continue to grow from strength to strength,” said Tamador Kouatly, Regional Manager Levant.

Emirates launched its service to Beirut in 1991, operating 3 weekly flights. Since then, Emirates has expanded to offer three daily flights utilising a mix of Boeing 777 aircraft, connecting travellers to destinations across the Far East, Southeast Asia and Africa via its Dubai hub.

Emirates connects Lebanese residents and nationals to over 160 global destinations through Dubai, with cities in Australia, Far East, South Asia, Indian Ocean and Africa being amongst the most popular destinations. Since 2015, the airline has also transported over 54,000 tons of cargo to and from the country, supporting businesses and exporters. Main commodities exported from Lebanon bound for the UAE and beyond to the Emirates network include fresh and frozen fruits and vegetables.

In March 2018, the airline operated its first ever one-off A380 service to Beirut to test the operations and airport infrastructure to accommodate the revolutionary aircraft.

Emirates employs talent from more than 160 countries around the world, including over 650 from Lebanon. The Dubai-based airline has held two Cabin Crew recruitment open days in Lebanon at the beginning of July 2018 and will be holding another two more open days by the end of this month.

Emirates currently flies to 160 destinations across six continents operating a modern fleet of 268 all wide-body aircraft. The airline is the largest global operator of the Boeing 777 and the Airbus A380 aircraft offering passengers extensive products and services. Passengers can enjoy the airline’s in-flight entertainment system, ice, with up to 3,500 channels of movies, TV programs, music, podcasts and LIVE TV. Travellers can also enjoy up to 20MB complimentary on-board Wi-Fi and regionally inspired meals on-board prepared by award-winning chefs.