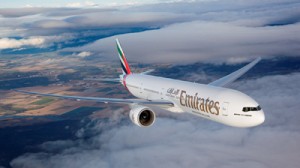 Emirates announced today the expansion of its operation in Switzerland with the addition of a second daily service to Geneva effective 1st June 2016. The second daily flight will double capacity on the route and represents an overall increase of 26% for Emirates in Switzerland.

The new flight will be operated by a state-of-the-art Boeing 777-300ER aircraft in a three-class configuration, with eight Private Suites in First Class, 42 lie flat seats in Business Class, and 310 spacious seats in Economy Class.

“With natural landmarks like Lake Geneva, the Alps and Jura mountains, Geneva is an attractive destination. It also hosts the highest number of international organisations, like Europe’s United Nations and the Red Cross, making it a global hub for diplomacy and banking. Demand is strong year-round, with high traffic from Thailand, Australia, Hong Kong and the Indian Ocean, with travellers visiting the city for business and pleasure,” commented Thierry Aucoc, Emirates’ Senior Vice President, Commercial Operations, Europe and Russia.

“Aside from more convenience for the growing number of Swiss travellers visiting Dubai, the additional frequency from Geneva will allow us to meet high demand and offer better connectivity for those travelling to countries like Africa, Indian Ocean islands, Bali and Thailand via our ultra-modern hub,” added Aucoc.

With an additional cargo capacity of almost 20 tonnes per day in each direction, Emirates SkyCargo will offer better access for Swiss companies to economies around the world. Exports from Geneva include pharmaceutical products, automobile spare parts, chemicals and semi-conductors. The presence of international organisations like the Red Cross also generates high humanitarian cargo traffic on the route.

Customers on Emirates’ flights enjoy the famed hospitality of its multi-national Cabin Crew, including Swiss, as well as gourmet cuisine and Emirates’ award-winning ice entertainment system. With more than 2000 channels of on-demand entertainment, from movies, television programmes, games, audio books, and music from around the world, ice has been named the world’s best inflight entertainment system by Skytrax for 11 consecutive years.

As with all Emirates flights, passengers will benefit from a generous baggage allowance of 30kg in Economy Class, 40kg in Business Class and 50 kg in First Class. Passengers travelling in premium cabins will also enjoy lounge access as well as Chauffeur-drive service.