Failte Ireland: Once Upon A Time On An Island Not So Far Away… 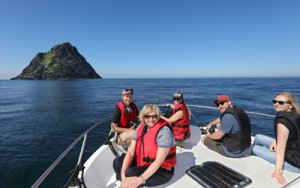 This week Fáilte Ireland is hosting a group of high profile international journalists on a trip to Skellig Michael to follow in Luke Skywalker’s footsteps to see for themselves how the force was awakened. The journalists visit is being hosted and managed by Fáilte Ireland in collaboration with Tourism Ireland.
The journalists write for some of the world’s leading magazines and newspapers including the National Geographic Traveller India, the Toronto Star and Het Laatste Niews newspapers in Belgium, and have a combined readership of over 15 million. The group also includes Katie Plick from MatadorNetwork.com in the USA, one of the world’s largest online travel magazine – followed by more than 110 million people per month.
Speaking about the visit and the opportunity presented by these visiting journalists to Skellig Michael and Kerry, Ciara Surgue of Fáilte Ireland, said –
“The Wild Atlantic Way is fortunately not in a galaxy far, far, away but right on our doorstep. Having an Irish location such as Skellig Michael in a high profile movie can’t but benefit Irish tourism and our intention is that the visiting journalists will encourage their readers, viewers and followers to explore the epic landscapes of our Atlantic coast.”
The visiting media will get to explore Skellig Michael, where Star Wars was filmed, as well as some other highlights of the local Kerry ‘galaxy’ including: a guided tour along the coastline at the west end of Valentia Island; a Kerry Dark Sky walk in Ireland’s first international Dark Sky Reserve; a visit to the Cromwell Point Lighthouse; and a tour of Killarney National park on a jaunting car to finish off their tour.