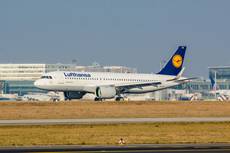 The world’s first Lufthansa Airbus A320neo has been transferred to Frankfurt today. The A320neo, with the registration D-AINA, took off with the flight number LH9922 at 13.34 pm from the Airbus factory site in Hamburg-Finkenwerder and landed safely 40 minutes later at 14.14 pm at its future home airport in Frankfurt. With this, the A320neo makes its first arrival at the Rhine-Main Airport. The first regular flight is scheduled for Sunday 24th January at 10.00 am from Frankfurt to Hamburg with the flight number LH010.

The A320neo’s new engines and improved aerodynamics enable a significant advance in terms of noise and emissions reduction. With the new PW1100G engine technology, the A320neo is 15 percent more fuel-efficient than today’s comparable models. The 85-decibel noise contour of a new A320neo is only half as great as the comparable contour of an A320 from the existing fleet.

The A320neo was delivered to Lufthansa last Wednesday and will fly initially from Frankfurt to two destinations within Germany, Hamburg and Munich. Another four A320neo deliveries are scheduled to follow this year.