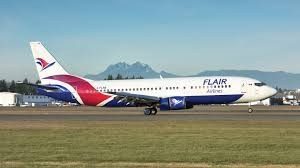 The low-fare alternative Flair Airlines had a high-flying summer. The privately-owned airline reportedly doubled its capacity in June, expanding its network to 10 cities including Victoria and Halifax. The flights themselves reportedly surpassed passenger projections.

David Tait, Flair’s executive chairman said that since mid-June.. their fleet of seven aircraft has carried more than a quarter-million passengers and we’re currently enjoying load factors in excess of 90 per cent.

The airline announced in June it would move its headquarters to Edmonton from Kelowna by the end of 2018. The company said around 75 per cent of its flights goes through the Edmonton International Airport.

Tait said in the release the airline would also aim for up to 20 newer, more fuel efficient and longer-range aircraft by the end of 2020. The first new aircraft will begin arriving in 2019 as the current fleet is phased out. On June 15, Flair operated some 200 weekly domestic flights.