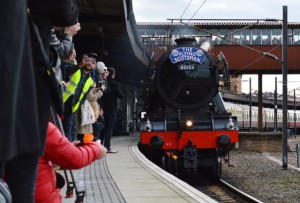 Fans of the famous Flying Scotsman are being urged to keep off the tracks and enjoy a safe day out when the recently renovated locomotive tours visit Wales next week.

Flying Scotsman returned to the East Coast Main Line, an electrified line, after a 10-year, £4.2million refurbishment by the National Railway Museum in February with an inaugural journey from London King’s Cross to York which was greeted by thousands of people lining the route.

However, the day was marred in parts by several dangerous incidents of trespass – where members of the public were seen walking along the tracks and taking photographs of the locomotive while other trains continued to pass on opposing lines.

Photographs shared online show crowds of people, including young children, stood in the path of oncoming trains with their view obscured by plumes of steam and smoke from the engine.

All trains on the East Coast Main Line had to be stopped as a result, causing a combined total of over 8 hours of delays (516 minutes) to 59 train services, costing the taxpayer almost £60,000 in compensation which was paid to delayed passengers.

The Flying Scotsman tours the UK throughout the summer and will visit Wales next Wednesday, 8 June when it travels from Crewe to Paddington via the Severn Tunnel. In preparation for this trip, Network Rail, the British Transport Police and other industry partners are warning those who are planning a visit of the dangers of straying onto the tracks.

Phil Hufton, Network Rail Managing Director, England and Wales said: “While the turnout to see Flying Scotsman so far has shown the passion and support for steam engines, and indeed the railway itself, the images of people stood on the railway taking photographs were deeply concerning and a breach of our safe operations.

“I cannot stress enough how dangerous it is to go onto the railway without any formal training and without permission, as well as being illegal. I am urging those who plan to enjoy seeing Flying Scotsman in the coming days to do so from a safe position and do not go onto the railway under any circumstances. I’d like to thank those who have observed safe practices during the Scotsman’s runs so far and ask others to follow that example.”

Chief Inspector David Oram from the British Transport Police said: “We understand people are excited about seeing the Flying Scotsman’s return and want them to have a great day out.

“Our priority is the safety of the public and passengers viewing and travelling on the train. The railway is a hazardous environment and we would urge people to use safe vantage points to view and take pictures of the train, stay clear of the line and not be tempted to risk their lives and the lives of others by trespassing on the tracks.

“To ensure the safety of those wanting to see the Flying Scotsman we have been in extensive planning discussions with the rail industry. Our aim is that members of the public are able to enjoy these great events by understanding the dangers, being responsible, staying within the law and most importantly – keeping safe.

“Trespassing on the tracks to view the service is not only extremely dangerous and can result in the train’s journey being delayed, but it is an offence for which the offender risks being brought before the courts, a fine of £1,000 and a criminal record. Where people are found to be trespassing, we will take proportionate and necessary action against them.”

Jim Lowe, Head of Operations at the National Railway Museum, who purchased the iconic locomotive for the Nation in 2004 and restored it to steam through a complex overhaul said: “While we understand interest in our celebrity loco Flying Scotsman will continue to be extremely high, we urge those wishing to view it on its UK tour dates do so from a safe vantage point.

“It is vital that spectators do not venture onto the railway, particularly when it is on the mainline as a full timetable of regular services will be running. In order to avoid overcrowding and incidents of trespass neither ourselves nor our partners will be publishing recommended viewing points or the timetable of when the train will be passing through specific locations – this includes positioning moves.

“We wish those who are taking journeys on trains hauled by the steam icon or going to see it at an event over the coming months an enjoyable experience.”