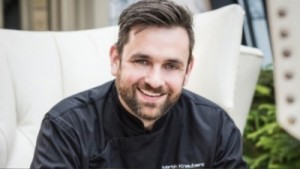 For Four Seasons veteran Executive Chef Martin Knaubert, stepping off the plane in Honolulu to begin his new job at Four Seasons Resort O‘ahu at Ko Olina was a coming-home moment, even though it was many months before the Resort’s May 2016 opening.

Most recently stationed on the mainland in a much colder climate and before that in two of China’s busiest cities, his memories kept calling him back to the islands.

“I thought I knew Hawaii, having lived here while I worked at Four Seasons Resort Maui – but Oahu has turned out to be so much more than I could have dreamed,” says Knaubert, who met his Hawaiian-born wife during those years. “Obviously the seafood is outstanding, but it’s the produce, particularly the unexpected produce, that has us all so excited.

Who knew we’d be able to get locally grown asparagus and watercress on Oahu? Having this type of access to local, organic farms producing the highest quality products and an unexpected harvest, matched by the bounty of fresh and rare catch offered by the island’s top fishermen, truly creates an extraordinary opportunity for me as a chef, but most importantly for our guests to experience fresh, innovative cuisine.”

In shaping the restaurant concepts and menus in concert with the food and beverage team, Knaubert has been inspired by the many farmers and fishermen he’s made friends with on the island, and his new kitchen brigade. “There’s an incredible level of skill and creativity found among Hawaii’s next generation of chefs,” says Knaubert of his hand-picked team. “And there’s such a strong multi-cultural history here that we felt confident in opening five distinct food and drink establishments, each offering its very own tasting palate matched by innovative design and stylish décor reflective of the Resort’s tropical, beachside setting.”

So what is Chef Knaubert’s personal recommendation among the five food and drink establishments opening this spring at the new Four Seasons Resort Oahu at Ko Olina? “Choosing just one restaurant or lounge is as tough a choice as narrowing down your final entrée selection at dinner among our expansive menus – all are simply incredible. The Fish House, however, is one of my favourite concepts. The prime location right on the beach with feet-in-the-sand dining is ideal for families and unlike anything else here in Hawaii, matched by an innovative line-to-plate sustainable menu, truly captures a deep sense of place here at Ko Olina.”

Fish House – Destined to become Oahu’s premier line-to-table seafood restaurant for lunch, dinner and drinks, Fish House is set on the edge of the Resort’s white sand beach, inviting a lively, casual approach to dining where the focus is on fresh island catch. Expect gigantic seafood towers, buckets of iced fresh catch, Hawaiian-style lobster and clam bakes, enjoyed with a local draft beer created exclusively for Four Seasons by Chef Knaubert. Even the classic Bloody Mary gets the Fish House treatment as it’s loaded with spicy grilled shellfish and pickled veggies. For those who prefer the bounty of the land, there’s something new and fresh every day at this feet-in-the-sand restaurant. 244 seats, casual attire, reservations recommended.