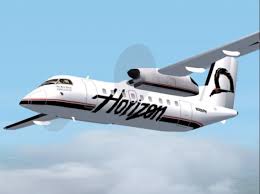 Horizon Air flight attendants and pilots together with their unions approved new contracts this week. With these agreements in place, pending board approval and acceptable commercial terms for the aircraft, Horizon Air is set to move forward with its plan to add regional jets to its existing fleet of Q400s, providing an improved regional experience for customers.

Horizon Air flight attendants represented by the Association of Flight Attendants (AFA) have approved a one year contract extension. The extended contract becomes amendable in July 2019. The ratification vote passed with 69 percent of the participating flight attendants voting in favor of the agreement.

Horizon Air pilots represented by the International Brotherhood of Teamsters (IBT) announced today that Horizon Air’s pilots ratified a new eight-year contract. There were 576 eligible pilot voters and among the 89 percent of pilots who voted, 69 percent approved ratification.

“These agreements were achieved in partnership with IBT and AFA to ensure the company has the best pilots and flight attendants in place while enabling a cost structure that sets Horizon up to successfully compete and grow as a regional airline,” said Horizon president David Campbell.

“We are pleased that we were able to reach an agreement that recognizes the importance of the flight attendant workgroup and new growth opportunities for our airline,” said Diana Shaw, Horizon Air’s vice president of customer service. “This is a testament to the hard work of the AFA local leadership and the company’s commitment to providing market competitive wages and benefits, all while honoring the excellent service our flight attendants provide to our customers.”

“Horizon Air flight attendants are a key factor in the success of our airline. Through hard work and engaged members, we were able to reach an agreement that contributes to Horizon’s ability to secure jet flying,” said Lexie Graham, AFA president at Horizon Air.

“We are excited to work together with the IBT to build a stronger, sustainable and profitable business for Horizon Air – even in an increasingly competitive landscape. We believe this agreement will continue to provide a great work environment for our pilot team,” said Brad Lambert, Horizon Air vice president of Flight Operations.

Pilots and Flight Attendants are covered by the Railway Labor Act, so labor agreements do not expire; they become amendable and remain in effect until a new contract is ratified.

Horizon Air is a subsidiary of Alaska Air Group and flies to 39 cities across the United States, Canada and Mexico.