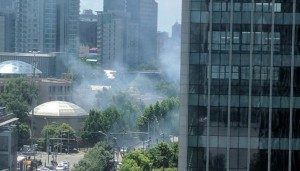 Officials confirmed a bomb was detonated and the U.S. Embassy in Beijing was hit by a huge blast. As per the witnesses there was a large explosion yesterday afternoon and dozens of officials swooped on the area.

In the South East corner of the Embassy compound there was an explosion in the public spaces.

An Embassy Regional Security Officer reported that there was an individual who detonated the bomb. So far there were no injuries other than the bomber according to the Beijing Police. They further confirmed that a 26-year-old man from the Inner Mongolia put on a ‘firecracker device at the intersection of Tianze Road and Anjialou Road.

The man’s hand was injured and he was rushed to the hospital and there were no word on the motive but police were investigating.

The city was full of smoke and people were seen outside the compound yesterday. The Chinese media mentioned that the man wanted to throw the device into the embassy but it exploded before. This caused injuries to the people and the police car in its path.

Some of the videos posted on the micro blogging platform Weibo raveled that the military and the police were doing something in the restricted area.

A witness tweeted about the explosion stating that there were smoke everywhere which was later updated that things were turning normal, people were lining up again for visas suggesting that it was not serious at all.

The Indian Embassy was located next door  and all the Indians were safe while a  Chinese police was monitoring a  vehicle outside the U.S Embassy.

A visa agent present near the blast location mentioned that the man who was trying to set off the explosive was intending to gather attention to a human right issue.

There is heavy security measures in the U.S. Embassy with bulletproof of glass wall and is America’s third-largest diplomatic mission in the world.  The Baghdad and Yerevan embassies are located behind it.