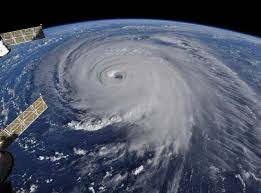 Hurricane Florence was on course Wednesday to strike a devastating blow to the east coast of the United States, with millions asked to flee inland hours before it was due to announce its arrival with torrential downpours.

Georgia along with four other coastal states issued an emergency declaration as the latest forecasts showed Florence dumping unprecedented amounts of torrential rain on the southern state.

As Florence closed in for the worst strike on the area in decades, President Donald Trump and state and local officials urged residents in the path of the storm to evacuate before it is too late.

The National Hurricane Center (NHC) said that Florence’s maximum sustained winds had eased slightly to 115 miles per hour (185 kph) and it had been downgraded to a Category 3 storm from a Category 4 on the five-level Saffir-Simpson wind scale.

The Miami-based NHC stressed, however, that while a slow weakening is expected over the next 24 hours “Florence is still forecast to be an extremely dangerous major hurricane when it nears the US coast late Thursday and Friday.”

Up to 1.7 million people are under voluntary or mandatory evacuation orders, and coastal residents were frantically boarding up homes and businesses and hitting the road on Wednesday as the storm approached.

Florence is forecast to dump up to 40 inches (one meter) of rain in some areas after it makes landfall in North and South Carolina.

Life-threatening storm surges of up to 13 feet (3.9 meters) were also forecast in some areas along with the possibility of tornadoes in North Carolina.

Duke Energy, a power company in the Carolinas, estimated that one million to three million customers could lose electricity because of the storm and that it could take weeks to restore.

The storm was heading for the coast of North and South Carolina but heavy rain was also expected in Virginia to the north and Georgia to the south.