In the first quarter of this year, Mexico sees a total of 20.6 million international tourists 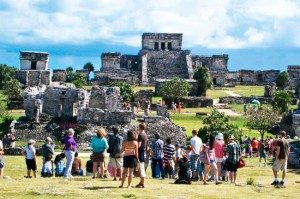 During the first quarter of the year, a total of 20.6 million international tourists visited Mexico, as per the Ministry of Tourism’s (Sectur) statement.

In comparison, 9.5 million Mexicans traveled internationally during the first half of the year, marking an 11.4 percent increase from the same period last year.

Sectur said, “Mexico maintains a constant growth in international tourism as well as economic revenue in spite of natural phenomena and external factors.”

Number of foreign travelers arriving by air between January and June was 9,639,00 or 5.4 percent. 4,191,000 travelers arrived at the country’s various ports by cruise ships.

In 2017, Mexico was the sixth most visited country in the world with 39.3 million tourists surpassing countries like Germany, Great Britain and Turkey, according to the government data. 2018 shows a lot of promise as well.