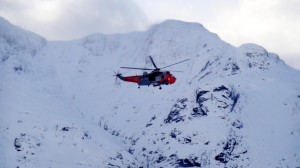 The climber from Leeds 64 yrs slipped on the peak of the western slopes and injured his leg. His personal locator beacon was activated which helped him to alert the UK coastguard who in turn notified the rescuers in New Zealand.

The locater helped the helicopter search to become more precise and an alpine team from the Fox Glacier village found the climber in a steep gully from where the rescuers lowered to the mountain slopes and winched the man aboard on the copter. He was flown to the Mount Cook village for a medical checkup. Fortunately the injury would not damage his leg and he would be able to walk according to experts.

The man was in tight rope position but thanks to his beacon and the deft handling of the rescue operators the man was neatly saved in the calmness of the night where he was in a very tight position struck in almost the same posture with no place to move.