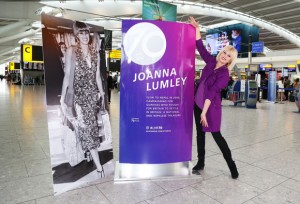 Joanna Lumley celebrates Heathrow’s 70th anniversary by unveiling the final plaque in a series of new installations
Each plaque represents an iconic moment in British culture and the airports history
The plaques feature some of the world’s most influential figures, from the Beatles to Her Majesty the Queen and the England rugby team.

Heathrow has hosted over 20 million flights and over 2 billion passengers since 1946
A selection of photos from 70 years of Heathrow are available for use at
To celebrate Heathrow’s 70th anniversary, Joanna Lumley today revealed the final of 70 unique platinum plaques, that will be on show around the airport, each representing an iconic moment of British culture from the past 70 years.

Heathrow has played host to some of Britain’s most memorable moments, from the Beatles return to the UK as global superstars in 1964 to thousands of screaming fans, to the England rugby team’s arrival back onto their home turf as World Champions in 2003. Heathrow also welcomed the world’s largest passenger plane in 2008 with the arrival of the Airbus A380, while in 1952, Her Majesty the Queen stepped onto sovereign soil at Heathrow for the very first time as the reigning monarch.

The full list of plaques can be viewed plaques
Joanna Lumley, who also turned 70 this month, was at the airport to unveil a plaque that commemorates her journey from Heathrow to Nepal in 2009 to campaign for Ghurkhas who fought in Britain to be able to settle here.

Joanna Lumley, said; “It’s such an honour to be here to celebrate the 70th anniversary of Heathrow, an airport that has played host to some of the world’s most amazing journeys. I have travelled through Heathrow for work, pleasure and for trips close to my heart, with my travels to Nepal being some of the most precious moments of my life”.

John Holland-Kaye, Heathrow CEO, said; “We’re very proud of the role the airport has played in millions of people’s lives as well as the economic success of the UK. This is an occasion for everyone to celebrate how Heathrow’s global connections have influenced our nation and to recognise the possibilities of those journeys yet to come.”

John Holland-Kaye continued: “Over the last 70 years Heathrow has also seen over 2 billion passengers pass through the airport and today over 75,000 dedicated people come to work to ensure the best possible experience for travellers. We’re all very excited about what the future of Heathrow will bring.”

This summer, Heathrow will also be marking its 70th anniversary and long-standing relationship with Qantas by offering 70 flights to Sydney, Australia for free. To be in with a chance of getting your hands on one of 35 pairs of tickets available, share your personal Heathrow story at stories.heathrow.com.

Markus Svensson, Qantas Regional General Manager, UK, Europe, Middle East and Africa said; “We’re thrilled to be partnering with Heathrow at this very exciting time for the airport. Qantas has held a fantastic partnership with Heathrow for almost 70 years and we’re proud to be able to offer 70 passengers complimentary flights to Sydney, as a celebration of the past, present and future of air travel.”

Since the UK’s busiest airport opened its doors in 1946, over 20 million flights have taken off from Heathrow flying over 2 billion passengers across the globe. New York, Dublin and Dubai have been the most commonly visited cities from Heathrow over the past 70 years, with airlines now flying to over 80 destinations across the globe from the airport.