Korean Air expands its presence in India with Jet Airways 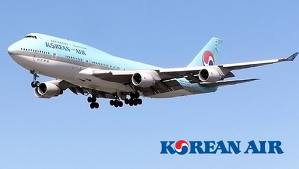 Korean Air, the flagship carrier of South Korea, has announced last Friday the launch of a new codeshare agreement and frequent flyer program with Jet Airways, India’s premier international airline.
The codeshare agreement will start from March 1st 2016, and will offer greater convenience and choice to passengers travelling from India to Incheon, Seoul, through gateway airports in Asian destinations such as Singapore and Bangkok. Passengers will also benefit from the connections onto Jet Airways’ daily service to Delhi.
As part of the codeshare agreement between the two airlines, Korean Air will place its “KE” code on Jet Airways’ 7 to 14 weekly flights from Mumbai and Delhi, to Bangkok and Mumbai-Singapore, and the codeshare routes are expected to be expanded even more by the end of this year. Passengers will benefit from the increased connectivity and frequency between Incheon, Seoul and cities in India.

Along with the codeshare agreement a new frequent flyer partnership program will take effect. This reciprocal partnership will enable members of both airlines’ frequent flyer program, SKYPASS and JetPrivilege, to earn and burn mileage on the entire network of the two airlines.
Korean Air currently operates an A330 aircraft from Incheon to Mumbai three times a week. The flight departs every Monday, Wednesday and Friday from Incheon and every Tuesday, Thursday and Saturday from Mumbai.
Korean Air A330-200Jet Airways is one of India’s foremost airlines operating over twenty international routes from the cities of India. Boasting an ultra-modern fleet of more than 116 aircraft, Jet Airways is making its mark on the global aviation scene as one of the world’s fastest growing airlines. Korean Air will continue to enhance synergies with Jet Airways as strategic partners by expanding codeshare routes together.

A codeshare is an aviation business partnership through which a flight operated by one airline is jointly marketed by one or more other airlines. The purpose of a codeshare is to make air travel easier, by allowing travellers to travel across the networks of multiple airlines with a single reservation, in order to reach their final destination.