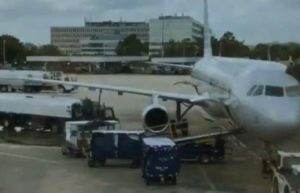 The airlines confirmed to PhillyVoice that the incident occurred and called it a ‘minor fuel spill’.

The airline did not release any further details about why the spill occurred as of 9.15 p.m. but said that it might have been an issue with the fueling truck and not the aircraft.

Multiple passengers documented the ordeal on a microblogging site, asking American for some sort of update on their flight that was delayed about four hours.

Eventually, it appears that emergency responders from Philadelphia International were alerted to the situation and attempted to clean up the spill.

Meanwhile, everyone at the gate was just watching this all go down.

According to the airline’s website the flight should have left at 1 p.m.

One of the passengers Rebecca Morgan said passengers were moved to another gate in the airport to board a new plane, which was intended for takeoff around 2:30 p.m.

Looks like that flight didn’t leave until 5:30 p.m. It landed around 9 p.m. on Tuesday.