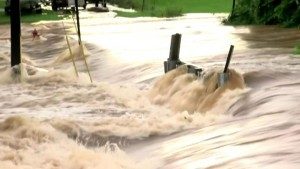 Parts of Lynchburg, Virginia have been issued evacuation orders considering that a dam may fail amid flooding.

On Thursday evening the Lynchburg Water Resources Department stated that the College Lake Dam crossed its capacity after more than 15 cm of rainfall.

In around seven minutes the city of Lynchburg could be easily flooded if the dam fails completely as it is the closet settlement downstream of the structure according to the National Water Service.

The residents have been warned of not driving as the floodwater may contain debris. The city has about 80,000 people and is located in the Blue Ridge Mountains.
So far number of people whose home were expected to be at risk were evacuated along with their pets to nearby school and were advised not to go home for a day.

Lynchburg’s Department of Emergency Services said that around 124 households were asked to evacuate and the weather authorities stated that the Blackwater Creek and Ivy Creek had the risk of flooding.