Mexico City gets its new Secretary of Tourism 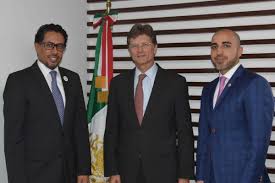 After much gossip in terms of who will fill the role, Carlos Mackinlay has been chosen as the next secretary of tourism for Mexico City.

As per Pasillo Turistico, the statement was made by Claudia Sheinbaum, who is the incoming head of government.

Mackinlay brings widespread experience in tourism comprising previously served as head of the Ministry of Tourism under Marcelo Ebrard, after Alejandro Díaz Rojas put down his papers from office.

For just a year, during that stint Mackinlay filled the role but had a major impact in terms of the development and tourist positioning of what was then known then as the Federal District.

Mackinlay has bachelor’s and master’s degrees in economic sciences from the University of Grenoble, France. Also, he is a CIDE researcher in economics of Latin America and was accountable for special projects in the General Coordination of International Relations of the Federal District Government, according to Pasillo Turistico.

Besides, he formerly worked as director of the Office of Congresses and Conventions of Mexico City and advisor to the Secretary of Tourism of the capital, Alejandro Rojas.

In the early phase of his career, Mackinlay was also general director of the Institute of Tourist Promotion of the Secretariat of Tourism of the Federal District. His initial entry into tourism however, goes back to 1995 when he took over management of a tourism travel agency and was a tourist guide.