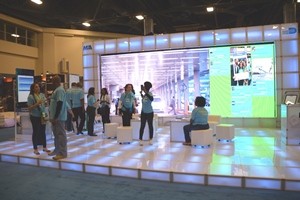 Miami International Airport’s latest customer service enhancements were on full display at the 2016 eMERGE Americas technology expo and conference this week, demonstrating to the global event’s 13,000 attendees how the airport continues to infuse technology into its travel experience.

Visitors to MIA’s interactive display area received a virtual tour of the hub airport’s technology makeover, starting with MIA Airport Official 2.0, the upgraded mobile app launched in February 2016. Thanks to more than 500 Bluetooth data beacons installed throughout MIA, users can now scan their boarding pass and immediately receive turn-by-turn, blue-dot navigation with estimated walk times, real-time flight updates, and shopping and dining suggestions nearby based on their customizable personal profile. MIA is one of only a handful of airports in the world to incorporate beacon technology with its mobile app to provide this cutting-edge, personalized travel experience. MIA Airport Official 2.0 is available for download free at the iPhone andGoogle Play app stores.

Also featured was MIA Connections, MIA’s free digital magazine available online at www.MIAConnex.com or via the Twitter hashtag #MIAConnex. The publication earned national recognition last year by winning first place in the Newsletter category at the 2015 Airports Council International-North America’s Marketing and Communications Conference, which drew more than 350 entries in 18 categories from across the U.S. and Canada.

In a simulation of the international arrivals process, attendees got to try out one of MIA’s automated passport control kiosks – self-service devices that allow travelers arriving from abroad to have their passports processed in less than two minutes instead of waiting in line for a U.S. Customs and Border Protection (CBP) officer. MIA now has 108 passport control kiosks – the second-most of any U.S. airport. Thanks to the kiosks and CBP’sMobile Passport Control app – launched at MIA in 2015 – more than half of MIA’s passengers now have their passports processed electronically.

To capture the entire MIA experience at eMerge, real-time social media posts by attendees were displayed on a large-screen LED monitor at MIA’s exhibition booth. Visitors were also encouraged to take pictures inside a commemorative photo frame as a social media memento, using the hashtag #MIAemerge, to see their photo displayed on the booth’s giant 26-by-10-foot LED wall. MIA’s social media program, which began in 2013, is now one of the fastest-growing among U.S. airports and interacts with nearly 90,000 followers daily. In fact, MIA’s social media channels helped the airport earn first place awards in annual marketing contests by Airports Council International-North America and Ragan Communications in 2015.

“We’ve made a concerted effort in the last three years to put MIA on the forefront of airport customer service technology,” said Miami-Dade Aviation Director Emilio T. González. “Whether it be quickly finding your way through the airport or expediting your passport clearance process, we have introduced state-of-the-art apps and way-finding technology to help our travelers travel smarter and easier than ever before.”