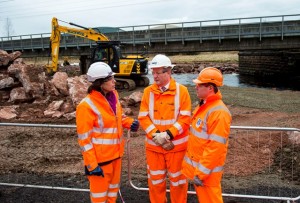 Engineers are currently working around-the-clock to stabilise the structure after one of its stone piers was badly weakened by floodwater damage caused by Storm Frank.Over 1,500ton of stone has been used to create a temporary dam across part of the River Clyde to allow engineers to access the base of the pier, where large sections of the original stone foundations have been washed away.

Over the weekend, engineers will pump around 150tons of quick-setting concrete into the void to recreate the pier base before beginning additional work to strengthen the structure and realign and repair the railway track above.

The recovery works are currently progressing to plan and engineers are continuing to target February 1 for the reopening of the line for passengers.Phil Verster, Network Rail managing director for Scotland, said: “Our engineers are working hard in very challenging conditions to stabilise and strengthen the structure.

“The West Coast Mainline is a vitally important transport link for passengers and freight and we are committed to completing these works and reopening the line for customers as quickly as we can.”UK Government Rail Minister Claire Perry said: “The storms and extreme weather conditions in recent weeks have resulted in great challenges for the transport system across the UK. We are working closely with Network Rail and the train operators to make sure that the considerable damage to the viaduct is repaired as soon as possible so that the line can be reopened, and we thank them for their hard work. I am determined that the safety of passengers and workers must always be our priority while this work is ongoing.

“I’d also like to thank customers for their patience during this period of disruption. The UK Government is working with the industry to ensure passengers are kept informed and alternative travel options are provided wherever possible. Passengers wishing to travel should contact their train operator for advice and plan their journeys in advance. We continue to monitor the situation closely to ensure it is safely opened as soon as possible.”

Scottish Government Transport Minister Derek Mackay said: “The record amount of rainfall that we have witnessed over recent weeks has resulted in significant damage to transport infrastructure around Scotland, including the West Coast and Highland main lines.

“I recognise the inconvenience that these works are causing to passengers, however, the safety of Scotland’s railways is of paramount concern and the severity of the damage to the viaduct meant that engineers were left with no option but to suspend all services that use it. I can assure the public that Network Rail are doing all they can to get the rail service operational again under difficult conditions.

“The Scottish Government is working closely with the rail industry to ensure that repairs are being carried out as quickly, safely and efficiently as possible and that passengers are being kept informed of the most appropriate methods of alternative travel. I would like to thank the public for their cooperation and understanding.”

While work to repair Lamington Viaduct continues, Virgin Trains will be running a shuttle service between Glasgow Central and Carlisle, via the Dumfries line, to connect passengers back into the West Coast Mainline.

At the same time, it has been confirmed that work to upgrade the East Coast Mainline between Newcastle and Darlington over coming weekends in January will go ahead with Network Rail (NR) and the Train Operating Companies (TOCs) working together to help passengers make cross border journeys.Journeys between Edinburgh Waverley and London King’s Cross will run via a diversionary route and travel times will be extended.

Passengers who are planning to travel on either the East or West Coast Main Lines or via trans-Pennine routes are advised to check with their train operator before they travel but can be confident that they will be able to make their journey although it might take them longer or be by an unfamiliar route.

Phil Bearpark, Virgin Trains’ Executive Director of Operations and Projects on the West Coast route, said: ‘We’re really sorry for the inconvenience that this closure of the West Coast Main Line has caused for our customers. Safety is of paramount importance to the railway and we fully support Network Rail as they work to get the route back into use.

“We’ve worked really hard with our industry partners in the ScotRail Alliance to put in place a diversionary service between Glasgow and Carlisle via the Dumfries route and are really pleased that, from Sunday, frequencies will increase to hourly throughout most of the day. Journeys for customers travelling to Carlisle and onwards stations, including London, will still take just over an hour longer than normal but will mean that most of our customers will no longer have to use buses. This is a great example of the industry coming together and working collaboratively in the interests of passengers.