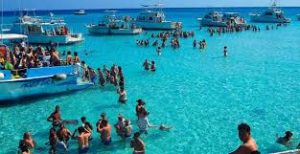 A western New Mexico city surrounded by Navajo culture and Native arts and crafts is experiencing a tourism boom which was not seen since the 1970s.

Tourism officials in Gallup, New Mexico, said that the city has seen an increase of about 7 to 10 percent in visitors recently due to foreign tourists.

They said that the interest in native culture and grafts is a favorable exchange rate that makes it economical for foreign tourists to visit during summer.

During the last two years, the city has been promoting the region with the “Gallup Real True” campaign that includes images of outdoor adventure, Navajo culture and Native arts and crafts.

Area officials have been attending the biggest trade fair on tourism in the world, the International Powwow and are aiming for more travel tours for this area.

Gallup is located on the edge of the Navajo Nation and sits along historic Route 66. Overall, New Mexico has seen tourism increases statewide. New Mexico Governor Susana Martinez has announced that 35.4 million trips were taken in New Mexico in 2017, breaking the record set in 2016 of 34.4 million.