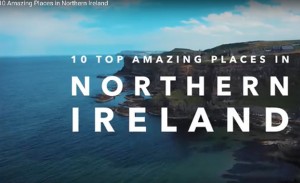 Tourism Ireland has launched a new online film using drone footage to capture ten iconic and scenic locations around Northern Ireland. It features places like the Mourne Mountains, the Sperrins and Lough Erne, as well as Game of Thrones filming locations like the Dark Hedges.

Titled ‘Ten Amazing Places in Northern Ireland’, the film has been created by Tourism Ireland to encourage people around the world to come and visit in 2016. It features coastal and mountain vistas, castles and volcanic landscapes – using tranquil music to underscore the views.

Niall Gibbons, CEO of Tourism Ireland, said: “Northern Ireland is packed with natural and historic gems and the availability of drones has allowed us to showcase these places in a way that hasn’t been done before. Our latest film features stunning aerial footage – showing Northern Ireland at its very best – which will help entice prospective visitors everywhere to come and holiday here this year.”