New York to witness growth in tourism despite hurdles 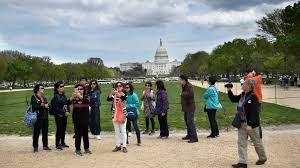 A long drawn trade war with China, signs of a looming recession in Europe and a strong American dollar that hurts the buying power of foreign tourists.

Generally, all of these forces should weigh against international tourism. But in New York City, at least, the visitors keep coming in record numbers.

This summer, New York is on pace for its highest annual tally of tourists — nearly 67 million, according to the latest estimates from NYC & Company, the city’s tourism marketing agency. That would be close to two million more visitors than the city claimed in 2018 and would be its 10th consecutive year of rising tourism, said Fred Dixon, the agency’s chief executive.

The growth of tourism from China — the No. 2 source of foreign visitors to the city — has slowed significantly since President Trump started raising tensions by placing tariffs on Chinese imports. China has devalued its currency, driving up the cost of purchases its citizens make on overseas vacations.

At the Metropolitan Museum of Art, an increase in Chinese tourists traveling on their own has made up for a decline in groups arriving from China, said Ann Bailis, a spokeswoman for the museum. Of more than seven million visitors to the Met in the past year, about 28 percent came from outside the country, down from 34 percent in the previous 12 months.
“We’re facing some headwinds economically and geopolitically, but we’re still on track for growth in 2019,” Mr. Dixon said. He noted, however, that visitors had cut back on their spending.

Mr. Dixon said 1.16 million visitors from China are expected this year, an increase of about 50,000 over 2018. Despite the turmoil over Brexit and the weakness of the British pound, the city anticipates a similar increase in visitors from the United Kingdom, the city’s No. 1 source of foreign tourists, he said.

Those increases will offset the drop in visitors from South American countries whose economies are in turmoil, most notably Argentina, Mr. Dixon said.

New York has gotten a lift from some big events this year, including the WorldPride celebration that coincided with the 50th anniversary of the Stonewall uprising. The reopening of the Museum of Modern Art in October will also draw visitors to the city, Mr. Dixon said.

But New York will not be such a center of attention in 2020, when the Summer Olympics will be held in Tokyo and the political conventions are set for Milwaukee and Charlotte. Still, Mr. Dixon said, his agency is projecting a modest rise in visitors again next year, provided the global economy stabilizes.