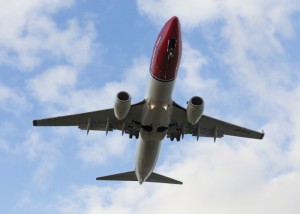 Norwegian took delivery of its first 787-9 Dreamliner. Norwegian already operates eight 787-8s and will use its 787-9s to launch new routes across North America, South America and South-East Asia.

The 787-9 complements and extends the super-efficient 787 family. With the fuselage stretched by 20 feet over the 787-8, the 787-9 will fly more passengers and more cargo farther with the same exceptional environmental performance — 20 percent less fuel use and 20 percent fewer emissions than similarly sized airplanes.

“The delivery of Norwegian’s first 787-9 marks our continued commitment to the company’s global expansion and ensures that travelers across the world will have access to high quality flights at a low fare. The 787-9 will give Norwegian unrivalled operational advantages, large improvements in fuel efficiency and much lower costs,” said Norwegian’s CEO Bjørn Kjos.

The Swedish actress Greta Garbo adorns the tail of the aircraft. Its first commercial flight will commence on February 27, from Oslo to Orlando.

Norwegian currently has eight 787-8s in its fleet. It has 30 787-9 Dreamliner aircraft on order in addition to 100 Boeing 737 MAX, 100 Airbus A320neo and 34 Boeing 737-800s. Norwegian has one of the most modern fleets in the world, and was voted the most environmentally transatlantic airline in 2015 by The International Council on Clean Transportation.